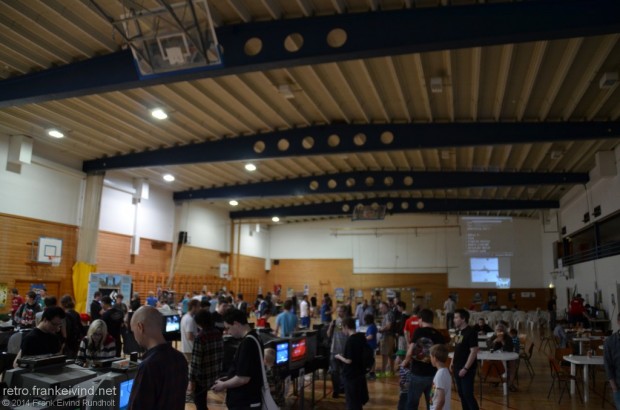 I was attending the Retrospillmessen (retro gaming expo) in Sandefjord, Norway on May 24.

There where a lot of consoles and computers, so I hade many round to look, take pictures and test them out. I think I tried most of them, but I’m not sure.

I tried the not much liked E.T. game on Atari 2600 and the very hard game Dragon’s Lair on Philips CDi. Timing is everything in that game.

I also got a new favourite, Mine Storm on the Vectrex. The Vectrex is a console with an integrated vector screen. Very fun to have tested that one.

It was also very fun to play Lotus 2 on the Amiga 500 again, one of my favourite games on that computer. Pinball Fantasies on the Amiga CD32 was also great.

At last, I had the chance to try the Retron 5 from Hyperkin. It’s a 10-in-1 console and will be released in the US early June. You can read my impression here.

You also had the chance to by old games. I bought Skate or Die for NES, Populous and Land of Illusions starring Mickey Mouse for Sega Master System.

This entry was posted in expo, retro and tagged expo, retro. Bookmark the permalink.

One Response to Retro Gaming Expo in Sandefjord