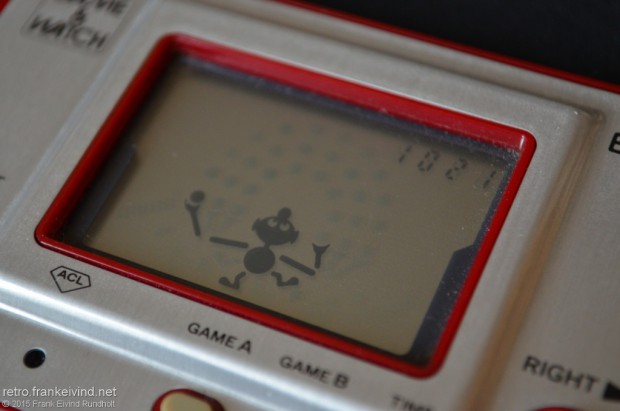 I’m not sure if Nintendo knew what sucess they starter, when they released their first Game & Watch game on April 28, 1980.

Ball is a game where you controll a juggler. You have to make the ball stay in the air as long as possible, to score as many points as you can. While you had three tries in the later Game & Watch games, in Ball you only have one. You loose the ball on the ground and you’re out.

You have two difficulties in Ball. In Game A you have two balls in the air at the same time, while you in Game B have three balls. You get 1 and 10 points respectively for each catch. In the start, the ball moves slowely back and forth, but the speed increases over time. When you reach a certain score, the speed slow down before it speed up again. When the ball hit the ground, it crush like a egg. A bit strange…

Ball (AC-01) belong to the Silver Series. These games have a silver frontend. Like the other game in this series (Flagman, Vermin, Fire and Judge), the screen doesn’t have a background. The colourfull background first appeard in the Gold Series.

The original from 1980 is hard to get by. Luckily, Nintendo reproduced Ball in 2009 for Club Nintendo in Japan an later came to the US. This is the version I bought on eBay, and it’s my very first Game & Watch game. You can also play Ball on the Game & Watch Gallery on Nintendo Game Boy and as a DSi Ware.