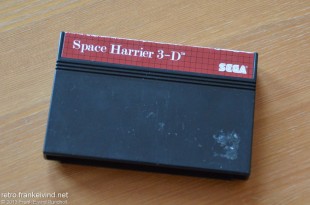 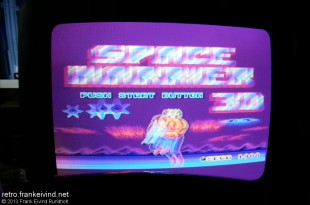 Space Harrier was released in the arcades in 1985 and on the Master System a year later. And in 1988, Sega released a 3D version of the game on Master System which is actually a sequal to the original and not a remake.

Space Harrier 3-D on the Sega Master System is one of the 8 games Sega made for the SegaScope 3-D/Sega 3D glasses.

The Land of the Dragon is ruled by a corruped tyran and it’s your job as the Space Harrier to find the missing heir of the throne, Euria. There are 13 stages in the game.

Your character can either run on the ground or fly in the air. You shoot by pressing either the 1- or 2-button.

The graphics in the game are good, or as good an 8-bit 3D shooter can be. The object on the ground might look like stickers on a board coming at you, but was probably the only way to scale the object back in ’88. Sega re-used the sample “Get ready” from the 1986-game.

The use of SegaScope 3-D gives the game a good depth. And I’m impressed that it works so well on an 8-bit console. If you don’t have the 3D-glasses, you will see a double-blury image.

All in all, a good game, though I think it’s a bit hard (probably need to play it some more). 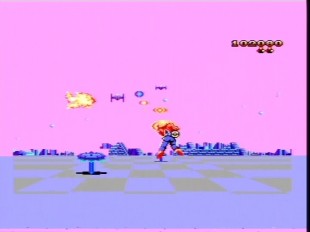 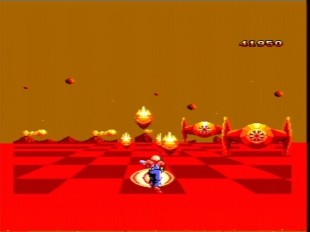