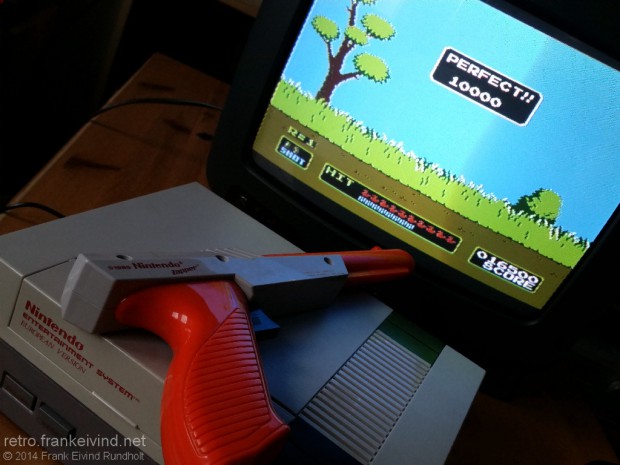 Duck Hunt is one of the Nintendo NES classics. It’s a very funny and entertaining game. The game was released in Europe in 1987, but it was already out in Japan in 1984.

In short, you use the NES Zapper to shoot as many ducks you can to earn the most score. But there are some variants of the game.

In Game A, there is one bird, while in Game B two birds. That’s the differences. There are allways 10 birds, whom you have to hit a set number of to continue to the next round. You also have three shoots in each round. Which means that you can miss two in Game A, but only once in Game B.

When I played the game again after years, I had forgotten about Game C, the Clay Shooting. Two discs are shoot out at once, and you need to hit a set numbers of discs to continue to the next round.

For all the different variants, it gets harder as you progress. The ducks fly faster and you have to hit more of them to advance in the game.

Duck Hunt is actually based on another Nintendo game, Beam Gun: Duck Hunt. This was an electronical toy released in Japan in 1976.

I discovered a couple of things while playing Duck Hunt again. The ducks comes in three colours: black, purple and blue. But when you hit any of them and the dog show you the duck you shot, this is allways a black duck. I guess they did it this way to save space in the ROM (which was expencive and small in size at the time).

When you miss a duck, it flys away. You only get the message ‘Fly away‘ in Game A, not in Game B.

In Game A it’s possible for a second player to use the NES-controller to change the direction of the ducks.

And NO, you can’t hit the Dog (even if you want to). This is only possible in a bonusround in the arcade game Vs. Duck Hunt.

Duck Hunt is still a fun and entertaining game. You should dust it of, if you haven’t already done that!